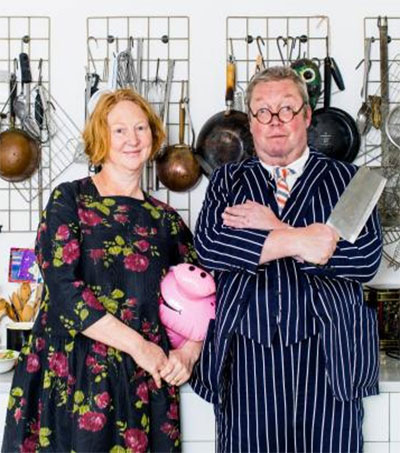 Chefs Margot and Fergus Henderson Chat to the Times

Margot Henderson, 53, and her husband, Fergus, 54, recently spoke with the Sunday Times on their whirlwind courtship and coping with his Parkinson’s.

Margot said that she first heard of her future husband through a kitchen porter.

“One day he announced he was off to work for this guy Fergus Henderson, whose food was simple and gorgeous,” she said. “Fergus was working in a pop-up [17 Mercer Street, in Covent Garden]. I went along and ate pigeon and peas. I thought it was wild, it was so far from what we were doing [at First Floor, in Notting Hill]. I couldn’t even look at a quail without boning and stuffing it. It seems stupid now.

“When I met Fergus he seemed a slightly strange but charming chap. His arms were zooming around like windmills and he was offering cigarettes to everyone, which I thought was rather wonderful for an Englishman. We met properly a year later, at the Eagle in Clerkenwell, where I was working. We talked about food, especially coriander, which I now realise was his way of schmoozing me. He hates coriander.

“Almost from the beginning we talked about starting a restaurant, and he said: ‘If we’re opening a restaurant, let’s be lovers as well.’ I thought: ‘Woah, that was confident.’ I wouldn’t presume to be so bold. The first thing he cooked for me was spaghetti with cabbage, truffle oil and Parmesan. I loved that simplicity. I fell in love with that confidence, with the food, with how he danced when he played Zorba the Greek on the stereo.

“Fergus was diagnosed with Parkinson’s in 1998. In some ways you grow strength around an illness like that. We’re lucky, you don’t die of Parkinson’s, but it’s difficult.

“Fergus has trouble walking and talking, although his speech is really good at the moment. When he had deep brain stimulation, that changed our life: it had been fraught seeing him unable to stop moving. It was a big thing for him not to be able to cook in the kitchen any more, but he never complains. He has great staff who all love him. He’s a team-builder, and that’s what he’s done with me: he’s built a family. He’s Mr Supercool … but he could lose a bit of weight.”

Fergus said: “Margot is a spirited creature, full of beans, and there are moments when you need to duck – sometimes a few in a week – but it passes. Going out to eat helps. She’s been an angel with the Parkinson’s. I’m slightly damaged goods, which I sometimes feel bad about. It’s unfortunate and not something you’d wish on anyone. It’s a bugger, but life carries on. You can’t worry, because the future’s the future, and whatever comes, comes.”

Photo by Will Sanders.