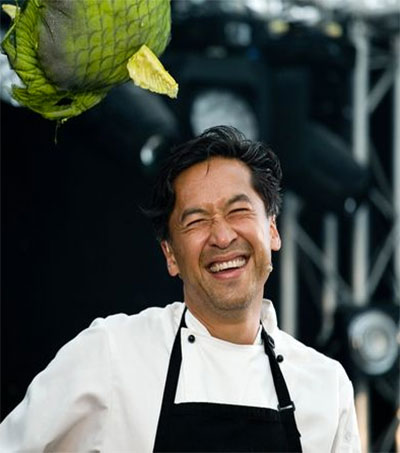 The chef behind Porthleven harbour’s popular Kota and Kota Kai restaurants made his third appearance on the series.

Kereama – who is half Māori and half Chinese-Malay – told Cornwall Live: “When I was first approached to appear on the Great British Menu I was really reluctant, but as I got through each audition stage I begrudgingly started to want to do it.”

The TV appearances have paid off with a noticeable rise in bookings since he first appeared on the popular series.

Kereama is very much an honorary Cornishman now as he’s lived and worked in Porthleven since 2004. With wife Jane, he took over the Smokehouse before opening Kota on the harbour in 2006.

The restaurant has won many awards including two AA rosettes, a Bib Gourmand from the Michelin Guide as well as being recognised in the Good Food Guide, Trencherman’s Guide and more.

Seven years ago the Kereamas opened Kota Kai just across the road. The more laid-back restaurant is one of the few high class venues in Cornwall dedicated to family eating, with a fun room dedicated to children, featuring games, books and DVDs, as well as a private party room and an adults’ lounge. The menu specialises in dishes representing Kereama’s New Zealand and Asian background.

Kereama is one of the originators of the Porthleven Food Festival which he has seen grow from 3500 visitors ten years ago to a jaw-dropping 40,000 on the Saturday of the festival this year.