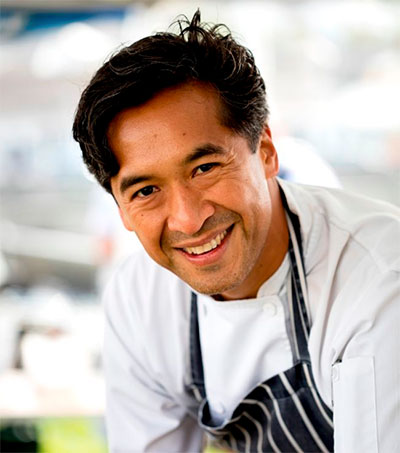 New Zealand chef Jude Kereama’s Kota Restaurant with Rooms in Porthleven, Cornwall is reviewed in the Telegraph, and rates highly.

“With a fantastic Asian-Cornish fusion restaurant downstairs, and Porthleven’s picturesque harbour on the doorstep, the Kota’s two simple, homey rooms are proof that sometimes substance can win over style,” the Telegraph’s Ros Belford writes. “Chef Jude Kereama and his wife Jane are natural hosts, and the emphasis is on making guests feel at home.

“Right on the long narrow harbour that splits this pretty Victorian fishing village in two. The beach and South West coast path are a five-minute walk away, and the village’s engaging mix of restaurants, pubs, cafés, galleries and shops are right on the doorstep. The dramatic coast of the Lizard can be walked along, and the delightful River Helford is a short drive away. Penzance, Lands End, St Ives and Falmouth are all less than an hour’s drive.

“Simple B&B rooms above one of the Kereamas’ two Porthleven restaurants, which are as popular with locals as they are with tourists.

“At Kota Kai the vibe is casual, with a long room overlooking the harbour, and a waterfront lawn on which you can dine in good weather. Jude, who is part Maori, part Malay-Chinese, brings Asian spices and cooking styles to fresh, meticulously sourced Cornish produce – squid with green mango salad, scallops with miso dressing and seaweed salad, massamam chicken curry, Laksa with prawns, mussels and fish.”

Kereama trained in New Zealand under Simon Gault, before moving to the UK in 1996.