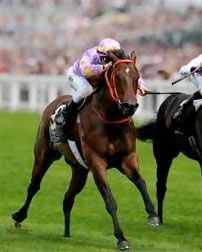 Little Bridge, bred by Des Hawkins’ Llanhennock Trust at Wentwood Grange in Waikato, has became the first New Zealand-bred horse to win at the Royal Ascot meeting, outgunning a class field to win the Group One King’s Stand Stakes. New Zealand Thoroughbred Marketing chief executive Andrew Birch says he couldn’t think of any other New Zealand-breds that had won at the famed Royal Ascot meeting, which runs for five days every June. “We know of a couple of placings by Starcraft and So You Think but this is the first winner we know of,” Birch said. Little Bridge sold for a mere $9000 at National Weanling Sale at Karaka to Hastings owner-trainer Margaret Hakema.