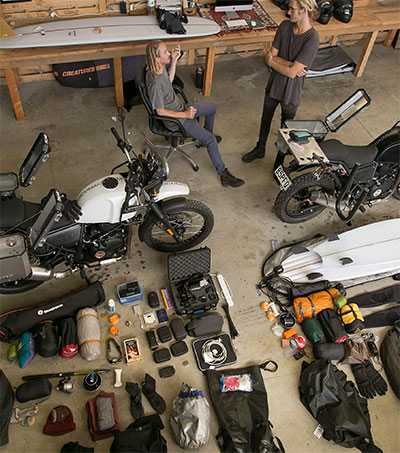 In March, Byron Bay friends Torren Martyn and Ishka Folkwell travelled throughout New Zealand on motorbikes looking for the country’s best surf spots. Surfer magazine caught up with the pair for a synopsis of how the trip went down.

“Ishka and I had both been to New Zealand a couple of times and neither had seen too much of it. We just thought doing something on motorbikes would be so wild. Neither one of us had done anything like it before. It was Ishka’s first time riding a bike,” Martyn explains.

“It’s such a different world travelling by bike. There’s so much more you need to consider – essentially you’ve got to pack as light as possible. Even timing when and where you will travel, everything is dictated by the weather. New Zealand gets so battered and beaten by rain, so the whole trip we never really had a big plan of where we wanted to go – it was all determined by what the weather was doing that day. For packing, I took two boards, a tent, a sleeping bag, a mat, two changes of clothes, a stovetop cooker, wet weather gear, thermals, a first aid kit and a couple little appliances,” he says.

“We started in the North Island in March. The weather there was beautiful – between 15 and 25 degrees Celsius, nice clear skies.

“We got some pretty good waves. We weren’t surfing as much as you’d imagine. On a surf trip that long [13,000km in a couple of months], you’d think you’d be getting waves all the time. But New Zealand is such a fickle, wild part of the world where it takes so many elements to come together.

“You’d get those big lows that come up from Tasmania and hit the west coast. Which always seems to be messy and wild and then for the east coast you want those cyclone swells coming out of the Pacific Ocean.

“It’s more about adventuring and exploring and seeing the countryside for what it is rather than just flying in and out for a swell and then being over and done with it – this way of travelling gives the surf trip a little more heart and longevity I guess.”