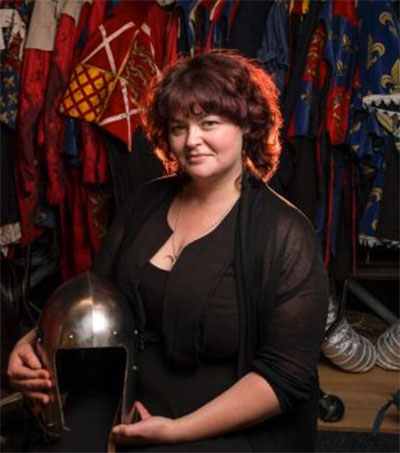 If there were a holy grail for costume designers today, it would have to be working on Game of Thrones, according to Kerrie O’Brien writing for the Sydney Morning Herald. New Zealander Chantelle Gerrard, 36, did just that, spending a year in Belfast as part of the team sewing outfits for the likes of Daenerys Targaryen and Jon Snow.

Her CV also includes making space suits for The Martian and wardrobe supervision for Billy Elliot. In Melbourne for the launch of the Pop-Up Globe, a replica of Shakespeare’s Globe Theatre that’s been built next to the Myer Music Bowl, Gerrard loves the detective work involved in historical costumes. Conceived and designed in New Zealand, the Pop-Up will stage four of the bard’s plays over the next three months.

As head of wardrobe, Gerrard oversees the creation of more than 450 pieces. “Everything is made 100 per cent from scratch,” she says. “We have to make everything from a piece of material onwards, by printing onto it or sandwiching two pieces together.”

For just one costume for Henry V, Gerrard says they started with a cow hide, dyed it blue, then stamped the gold on it, sealed it and then added the brigadine, which involves steel panels being sewn onto fabric. It sounds painstakingly slow and at times it was, she says. Similar processes were used to create many outfits, with panels of fabric hand dyed individually. Some items needed to be done two or three times because the gold or dye didn’t hold.

“When the hems are in the faces of the groundlings [audience members who stand in the pit in front of the stage], you want them to see something pretty,” she says. “I can’t stand seeing machine sewn on period costumes.”

So how did she get into this field? Gerrard says she loves history and has always been interested in design but the truth is she is also into historical reenactment and dressing up in period clothes.

“No one taught me how to pattern make or sew, it was purely through the historical side of re-enactment … That’s why it works – because I’ve trialled it for 20 years by wearing it myself.”