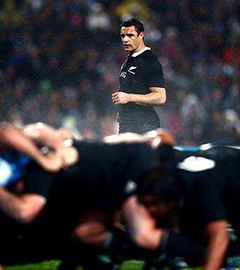 Can Forward-Power Win it for England?

The New Zealand forwards were outplayed by their French counterparts in Paris at the weekend and they will be given an even more searching examination by England, who easily dismantled the powerful Argentine forward pack. But is forward-power enough for the Red Roses to prevail? Not according to Sir Ian McGeechan, the former player and coach of the British Lions.
McGeechan, who played the men in black nine times for a solitary success for the Lions in the second test at Christchurch in 1977, believes forward power is only one of four critical factors that must be achieved if England are to repeat their shock win from last year.

First is the right attitude. Players have to understand that the All Blacks will be better than any other side England have faced, writes McGeechan in the Daily Telegraph, and unless they hold that belief they will fail in their mission.

Decision-making – a collective understanding of the decisions to be made – is also critical, particularly when matched with unsurpassed support play, which the Scotsman believes is one of New Zealand’s clearest strengths.

“If an opportunity arises, you do not see just one All Black reacting, you can be sure that three or four will be in the ball carrier’s slipstream,” says McGeechan.

His final point relates to forward power: “Drive back McCaw”. One of the keys to last year’s English victory, says McGeechan, was the All Blacks were forced backwards at the breakdown, normally an area where the All Blacks captain reigns supreme.

The All Blacks received mixed reviews for their 26-19 defeat of Les Bleus, who earned kudos from their own press for their vigorous efforts that almost snatched a last-minute draw. Although England were less-than impressive in their own victory over the Pumas, they will be encouraged by how the French combatted the All Blacks forwards.