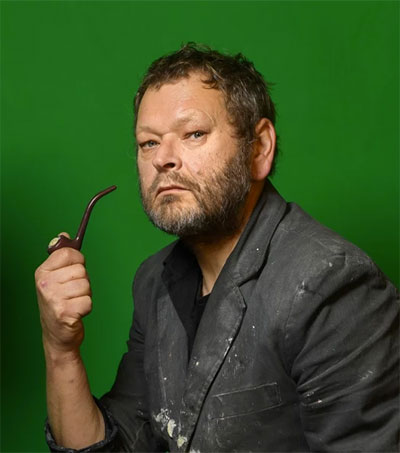 Ronnie van Hout might need to learn to say no. Not only is the New Zealand-born, Melbourne-based artist about to receive the first major solo exhibition at the new Buxton Contemporary gallery in Southbank but he’s also been commissioned by Bendigo Art Gallery to create a work for this year’s Melbourne Art Fair in August. Ashley Crawford reports for The Sydney Morning Herald.

“These are only a couple of things I am involved in at the moment,” van Hout says. “Last year was so dead that I said yes to all requests, and now I am a bit overburdened. I have a couple of other public sculptures I am working on, putting together a book, marking papers and parenting …”

The Bendigo commission, Surrender, features two towering figures of more than 2.4 metres in postures of submission. Viewers might immediately think of the evening news and events in the Middle East. Or teenagers cowering in an American school. Or even our own submission to the barrage of violent news we are pummelled with every day. However, in a typically mischievous tactic, his forlorn figures are in fact sourced from toy soldiers, the kind regularly massacred by six-year-olds.

Van Hout, a bold and brash multimedia artist, who combines the surreal with the social and the serious with slapstick, tends to confound viewers. (In 2016, a national news site in New Zealand called for a van Hout sculpture to be removed from the roof of the Christchurch Art Gallery building, saying visitors found it, among other things, “puzzling”.)

Van Hout may have been a dangerous artist to commission, but both Bendigo’s director, Karen Quinlan, and the Melbourne Art Fair’s director, Maree Di Pasquale, are thrilled with the result.

Asked to describe his practice, van Hout says: “I don’t see myself as having a practice. I have a workspace. To sum up what I do in a paragraph is difficult, but I would say that I try to work things out in the best way I know how, which is to say I couldn’t really see myself doing anything different to what I do now. Thinking about stuff and making things.”

‘No one is watching you’ by Ronnie van Hout is on at Melbourne’s Buxton Contemporary from 12 July until 21 October.