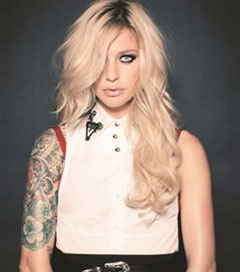 She’s only 26, but New Zealander Gin Wigmore has already acted alongside Daniel Craig and recorded in Frank Sinatra’s studio. You may already have heard the first single, a bawdy barrelhouse stomp called Man Like That, which became the theme to a James Bond advert late last year. A whirlwind of energy, Wigmore’s every sentence ends with a 72-point exclamation mark. She talked to the BBC about her unconventional road to fame. Is it true you met Al Green when you were making [Gravel and Wine]? “I went to the Reverend Green’s church in Memphis and he happened to be taking the service that day. That was pretty epic. He came out and said, ‘sorry, my voice is a bit rusty today’ and then bust out into the best songs I’ve ever heard in my life.” Wigmore released her first album, Holy Smoke, in 2009.