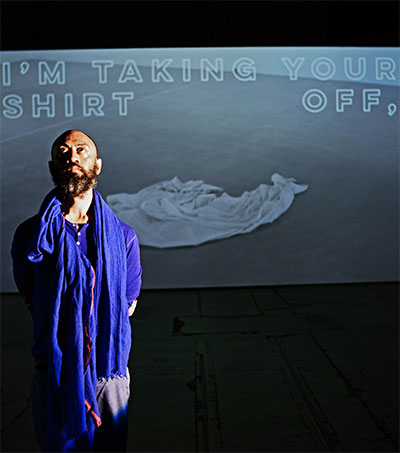 Wellington-born Sydney-based artist Brian Fuata, 37, was one of 24 artists exhibiting as a part of the “pioneering video art-inspired dance project” “24 Frames Per Second” on at Sydney’s Carriageworks.

The exhibition delivered “a groundbreaking and unprecedented showcase of dance-inspired film-based installations and interventions, presented within a curatorial framework that sets the bar for the presentation of video art at a lofty height and situates the exhibition at the forefront of experimental, cross-disciplinary practice.”

Fuata’s piece was one of the highlights. “Fuata challenges perceptions of human movement by removing the body altogether, instead employing the form of a ‘ghost’ which he combines with text to document the absent body,” Blouinartinfo UK reported.

Fuata created a series of three-line written observations of each film, which he then overlaid onto footage of an artistic performance recorded specifically for the show, but inspired by something he has been doing for the past two years.

He told Altmedia that a show of this nature was “kind of inevitable and natural, because there is a current turn in artistic and cultural practice to combine different disciplines, so this is very much a show of the moment.”