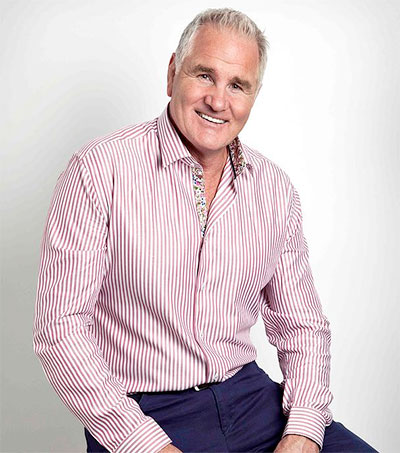 Though New Zealand-born rugby analyst and RTÉ broadcaster Brent Pope, 53, only launched his range of shirts in October 2014, it is now stocked all over Ireland.

Pope wanted shirts in premium quality fabrics that were easy to wash and iron and held their shape well. Coming from a rugby background, he also addressed the problems of sizing for muscular shapes and said that his shirts both feel good and look great. The range was a partnership with Ireland’s biggest department store Arnotts and the spring collection will be on sale in five other Dublin locations from the end of March.

Commenting on the Pope Shirts range ahead of the launch last year, he said: “I wanted to design shirts that were easy to wash and iron, that held their shape well, but most importantly felt and looked amazing on. I have always believed in investing in a great shirt that will stand the test of time especially to prevent colours fading and keeping their shape.”

With a “passion for fashion” and often voted as one of “Irelands best dressed men” the former rugby player and coach wanted to bring his own distinctive brand to the Irish market.

Pope is also the author of a number of children’s books.