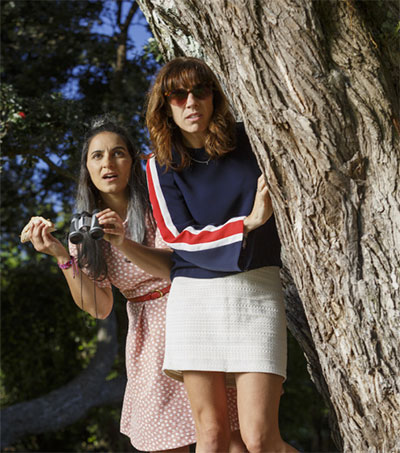 Australian city guide Broadsheet chats to the makers of The Breaker Upperers, a new comedy making it big at the prestigious South by Southwest (SXSW) festival in Austin, Texas. The film was created by New Zealand writers-directors-actors Madeleine Sami and Jackie van Beek.

It’s a modern rom-com that explores love in all its guises, most poignantly the platonic relationship between friends Mel and Jen. When Mel falls for gormless teenager Jordan (Boy’s James Rolleston), who has been unsuccessfully trying to dump his girlfriend with sad face and broken heart emojis, her relationship with Jen is stretched to the limit.

The idea for the film came to van Beek in her Auckland kitchen, contemplating various friends who had extricated themselves from tricky relationships.

“I thought, ‘Wouldn’t it be funny if we had a film with two females doing something really morally ambiguous,” van Beek says. “‘What if they were getting paid to break up couples, if that was their job?’”

The filming itself was short and sharp – just 22 days on a super skinny $2 million budget – with plenty of favours called in from their “comedy family”. Both Taika Waititi and Jemaine Clement have cameos, and Waititi is also executive producer.

Not only does the film tackle stereotypes around gender, sexuality, race and ageing in a delightfully subversive way, there are plenty of laugh-out-loud “you can’t say that” moments. And you can’t help but notice the film is part of a trailblazing set in having two women writing, directing and playing the leads.