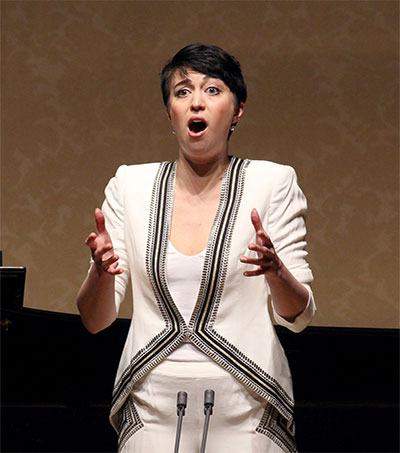 Wellington-born mezzo-soprano Bianca Andrew, 26, has won the Ferrier Loveday Song Prize for her performance of Hugo Alfvén’s “Skogen sover” and Hugo Wolf’s “Nimmersatte Liebe”. According to the Independent’s Michael Church, who attended the finals at Wigmore Hall in London, the standards were “stratospherically high.”

“To sit through this year’s Kathleen Ferrier Awards final was to feel like the Dodo in Alice in Wonderland – ‘Everybody has won, all must have prizes’. Every year this competition sifts out the young stars of tomorrow,” Church writes.

“Andrew carried off the Song Prize for a provocatively brilliant cabaret number.”

Andrew is currently studying at the Guildhall School of Music and Drama in London under the tutelage of Yvonne Kenny, where she is a full scholarship awardee on the Opera Studies programme for 2015/16.

Original article by Michael Church, The Independent, May 3, 2016.