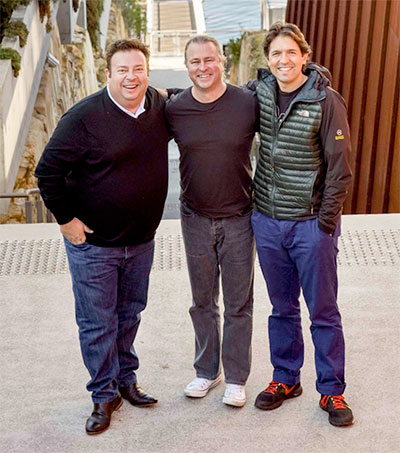 Ben Shewry Invites the World to Tasmania for Lavish Dinner

Australia’s best chefs, our own Ben Shewry (pictured, right) and locals Peter Gilmore (centre) and Neil Perry, recently hosted one of the most lavish meals in the country’s history, designed to convince international visitors that Australia is one of the world’s best eating destinations.

The “Invite the World to Dinner” event, part of a A$40 campaign by the government agency Tourism Australia, brought in guests from more than 16 countries to experience a meal prepared by three of Australia’s best chefs.

The challenge before Shewry, Gilmore and Perry was more than just to put on a memorable meal – it was also to help define Australian cuisine for a global audience.

Shewry’s salted red kangaroo tartare with bunya nut (a native Australian pine cone the size of a basketball) was nuanced and exotic, even for the Australians present.

In 2013, Australia’s main tourism body conducted surveys in 15 key foreign markets and found that only 26 per cent of people who had not visited Australia considered it to have good food and wine. After visiting, that number grew to 60 per cent, second only to France.

Shewry, 37, is originally from Taranaki. He is the head chef at Melbourne’s award-winning Attica, which most recently was named Gourmet Traveller’s best restaurant for 2015.