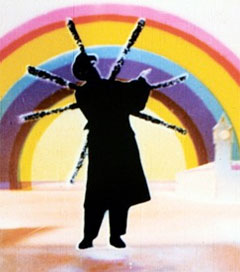 Christchurch-born Len Lye’s “deliriously jazzy 1930s animation for the Post Office Savings Bank shows public information films needn’t be dull,” Judith Mackrell writes for the Guardian. “The colours might look late-60s-psychedelic; some of the interaction between graphics and the human figure seems comparable with the experiments made by contemporary digital artists such as Klaus Obermaier. But this short animation, Rainbow Dance, was actually created back in 1936. Like Disney and his studio artists, Lye had a vivid sense that colours, shapes and lines could dance … There’s a blissful disconnect between medium and message here.” An internationally acclaimed modernist artist, Lye was born in 1901. Lye’s sculptures are also held in the collections of several major art museums, including the Museum of Modern Art (MoMA) and Whitney Museum in New York.