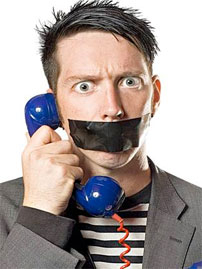 New Zealand comedian Sam Wills, 34, who’s solo act The Boy with Tape on his Face has been filling the 700-seat Pleasance Grand theatre since the Edinburgh Fringe Festival started, as won the £5,000 Foster’s Panel Prize. A mime, Wills wears duct tape across his mouth throughout the show. His comic shtick, like best show winner American Doctor Brown’s, involves the audience in a clever and subversive series of sometimes embarrassing visual jokes. “He is an outstanding comedian who proves that punchlines don’t need words,” said producer of the Foster’s Edinburgh Comedy awards Nica Burns, who added that Wills came to Edinburgh as a street performer in 2007, where he met his wife singing opera on the street as he was trying to put his body through a tennis racquet. Wills lives in London.

Tags: Boy With Tape on His Face (The)  Comedy  Edinburgh Festivals  Guardian (The)  Sam Wills