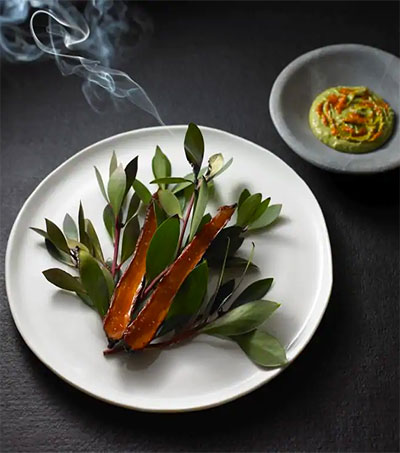 “On a recent visit to Melbourne, I was excited to say the least, to be able to secure a much sought after reservation at the award-winning restaurant Attica [owned by New Zealand chef Ben Shewry],” culinary expert Karen Anand writes for the Hindustan Times.

“It takes a while to get to the insignificant suburb of Melbourne called Ripponlea where Attica is situated. From the outside, Attica looks like any other high street restaurant. As you walk in, the dimly lit interiors with white table cloths and plain marble tables again could be any smart restaurant,” Anand writes.

“Shewry, though, is adamant on using only the best Australia has to offer. He spends an astonishing half an hour with me explaining his ethos, his dishes and what he loves to do. It’s like talking to an old friend not the chef owner of a restaurant ranked 20 in the world. ‘I don’t believe in using caviar, foie gras or other expensive Michelin restaurant-type ingredients’, he tells me. ‘My aim is to reflect the best of Australia with great taste and presentation’.

“The menu is a staggering 17 courses, one more stunning than the next and many a nod to the area intellectually and otherwise, not just Australia. I keep thinking, I’m going to have just a bite of each to pace myself and end up eating each course in its entirety till I give up somewhere near the lamb souva. There are 40 attentive staff, which is more service to guest ratio than any other restaurant in Australia. Courses arrive one after another – a volley of brilliantly thought out dishes with indigenous ingredients.”