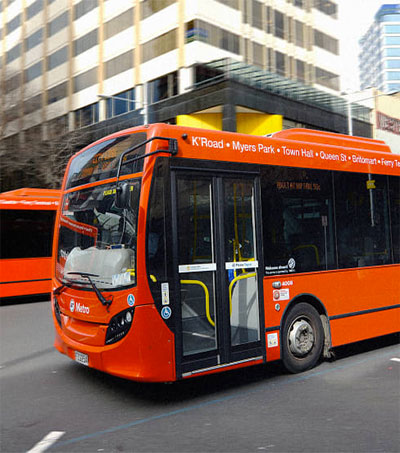 Auckland Gets More People on Its Buses

“Cities across the world are struggling to tempt people out of their cars and onto transit, but Auckland has reversed the trend by creating a really, really good bus network for very little money.” Fast Company’s Eillie Anzilotti buys a ticket and takes a ride.

“In 2012, the then mayor of Auckland Len Brown, put a challenge to the city’s transportation department that seemed nothing short of impossible: Brown wanted to see annual transit ridership, which was then hovering at around 60 million rides, double in the next decade,” Anzilotti writes. “No city had ever accomplished a transit ridership lift of this magnitude before. But while Auckland’s population was growing steadily – around 2 per cent per year since 2000 – transit ridership numbers were stagnating. The local government decided to attempt the impossible and change that.

“According to the latest numbers, they’re succeeding. With three years and eight months left to hit their target of 120 million annual rides, the city is set to clock in at 100 million trips by the middle of this year. If trends hold, ridership will exceed the benchmark in 2022.

“To achieve this ridership lift, Auckland entirely overhauled its bus network. Working with Jarrett Walker, the transportation planning consultant behind Human Transit, the city took a look at its service in 2012 and decided that while it succeeded in transporting people from some of the furthest reaches of the city into the core, it did not offer nearly enough diversity in routes outside the city center. On his blog, Walker displays the two networks: the status quo in 2012, and the updates version he helped propose in 2016. It’s not hard to see how much more coverage the latter version offers.

“The success of Auckland’s strategy to boost transit ridership numbers by improving its bus service should serve as an important reminder to cities that the oft-maligned bus is one of the cheapest and most nimble tools within their reach to radically reduce car dependency.

“It’s inexpensive, flexible, and does not require infrastructure buildout, save for a splash of paint to indicate a bus-only lane. And when it works, as it has in Auckland, it really works.”