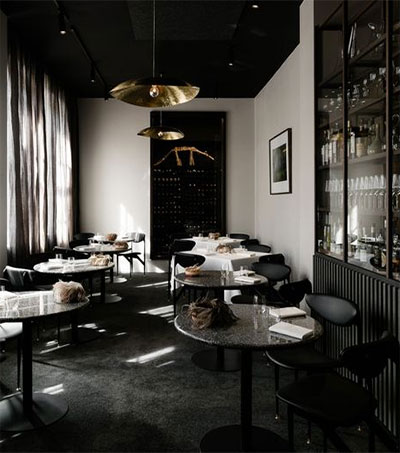 Ben Shewry’s award-winning Melbourne restaurant Attica now has an interior to match. New Zealand-born Shewry was not only keen to capture a sense of the Victorian bush for Attica but, as importantly, to reflect to the fine Australian cuisine served (one of the desserts, for example, is served in the shell of an ostrich egg).

Designed by Melbourne’s IF Architecture, this highly acclaimed fine-dining establishment in Glen Eria Road, Ripponlea, is ranked 32 in the world’s best.

For architect Iva Foschia, director of IF Architecture, there must have been some trepidation when asked by chef and owner Shewry and his wife Natalia, to rework this iconic restaurant.

“You could say there was a little pressure to meet such high standards,” Foschia says.

While Attica’s previous interior within a 1920s bank and residence was theatrical (think of black walls and spotlights over each table), the context could have been anywhere in the world.

The former bar also sliced the restaurant in two, with the front area further segmented with a wall separating two dining areas.

“The place was dark and dramatic, but it wasn’t aligned to the DNA of the place … We come from a team of craftspeople …” Shewry says, who respected IF Architecture’s vision for Attica.

That vision not only included the Victorian bush, but a sense of the early to late-1960s, when families would perhaps load up the station wagon for the day and set their picnic blanket under towering gum trees.

“I wanted to keep the palette fairly subdued to allow the focus to be on the food,” Foschia says, pointing out the burnt orange velvet-covered Scape Chair and the deep navy velvet banquette seating at Attica.