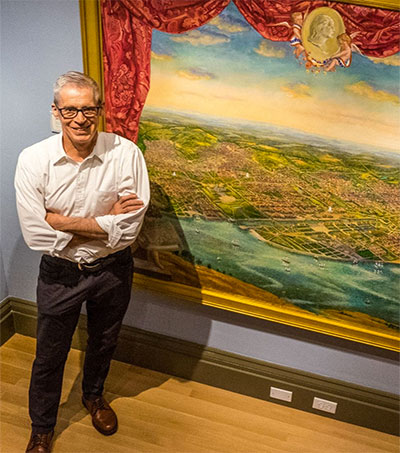 “I wanted a fire,” Hastings-born artist Peter Waddell said as he and Washington Post reporter John Kelly gazed upon one of a pair of his monumentally sized paintings.

Large the paintings may be – 6 feet wide by 5 feet high – but the details in them are tiny. There are tiny cows grazing on the Mall, tiny sailing ships in the Potomac, tiny pedestrians on the streets.

“I wanted a house on fire,” Waddell said. “But we wanted a historical fire. We couldn’t find one. And it’s hard to get drama at 1/32nd of an inch.”

It’s hard to get drama, but it’s easy to get a cramp. It took Waddell two years to complete the oil-on-canvas paintings. They were commissioned by Albert H. Small, a 93-year-old philanthropist and collector of historical D.C. objects.

The scale is such that Waddell had to render the tiniest details with a delicate, Size 00000 paintbrush.

“Made from the eyelashes of unborn mice,” he joked.

The paintings are the centrepiece of the exhibit called, “Eye of the Bird: Visions and Views of D.C.’s Past”. Before dirigibles and airplanes, before drones and satellites, it was artists, engravers and printmakers who gave dirt-bound Earthlings an idea of what our cities looked like from above.

Waddell, 63, is artist in residence at Tudor Place, an historic Georgetown mansion.