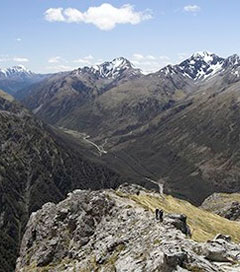 Aotearoa Casts Its Shadow on the Clouds

“There is a playful antagonism between the inhabitants of New Zealand’s two islands, North and South,” Man Booker Prize winner Eleanor Catton writes for the Guardian in a story about growing up in New Zealand.

“It’s a quarrel between substance and form, if you like, a question of emphasis – does a country’s nature owe most to its history, or to its land?

“I grew up on the South Island, in a city chosen and beloved by my parents for its proximity to the mountains – Christchurch is two hours distant from the worn saddle of Arthur’s Pass, the mountain village that was and is my father’s spiritual touchstone, his chapel and cathedral in the wild.

“Travel brochures try to capture the quality of New Zealand’s panoramas with adjectives – ‘pristine, ‘untouched’, ‘majestic’. But the words seem cheap and insubstantial, however accurate they may be, in the face of the real thing. The language of description is always a matter of equivalence (a word equals the thing it describes) and so cannot contend with the sublime. But the language of paradox, oxymoron and subtle contradiction – the language of children – does better.

“Aotearoa is a land made perfect only by its opposites, the water and the air. It is both north and south at once. It is a land that casts its shadow on the clouds.”