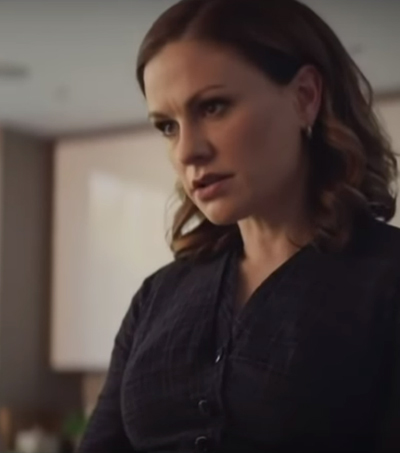 “After five years trying to get it off the ground, filming for Anna Paquin’s new TV series Flack has completed and the series is about to be released. Paquin, who stars in the series and executive-produced it, spoke to The Guardian’s Rebecca Nicholson.

“In Flack, Paquin is Robyn, a hard-living, self-destructive type who works in the crisis-management area of public relations. The show is a lot of fun, and reminds me what good TV was like before shows developed grand cinematic ambitions. It’s outrageous, a little bit camp and darkly comic in tone.”

“Paquin feels passionately that stories about “complicated women” should be told,” writes Nicholson.

“I mean, take Dexter. Male protagonists get to quite literally be serial killers and the audience still loves them. Whereas traditionally, if female characters put one foot out of line, from the sort of patriarchal ideals of what a perfect woman is like, then you have to watch them being punished for it. And I really am enjoying the fact that I’m part of a generation of women in film where we can just tell interesting, complicated stories about people who happen to be women,” she said.

“The power balance has changed,” said Paquin. “There are more women in executive and behind-the-scenes roles who have just had enough of being told what we can and can’t do.

“One has to work extra-hard as a woman in a very male-dominated industry. As an actress walking on to a film set, you’re guilty until proven innocent. They assume you’re going to be a pain in the arse, high-maintenance and difficult, and you usually spend the first couple of weeks having to work hard to prove that you’re not going to be a problem because you’re a woman. And I think we’re all just collectively done with that,” she said.

Paquin “was born in Canada in 1982, but grew up in New Zealand, then moved to the US as a teenager for work. She has been in front of the camera since she was nine, when she was cast in Jane Campion’s film The Piano,” writes Bicholson.