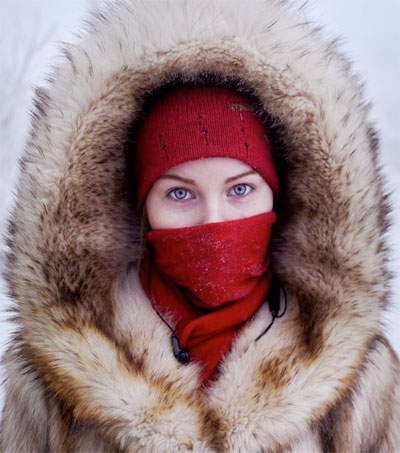 New Zealand photographer Amos Chapple says he shoots travel photos aimed at the news sections of papers and which need a headline to hang a story on. It got down to -31 degrees Centigrade in Oymyakon, Russia, over the weekend. “‘The coldest place on Earth’ is pretty irresistible,” Chapple says.

As frigid as that temperature seems, it’s typical for this town, long known as the coldest inhabited place on Earth.

He travelled more than 16,000km to reach this village of 500 residents tucked away in a remote corner of Siberia. It’s so nasty that planes can’t land during the winter, and it takes two days to arrive by car from Yakutsk, the nearest major city (it’s 927.8km away). Chapple spent several weeks shooting in Oymyakon and Yakutsk during the long, dark month of January in 2013 and 2014. His remarkable photos capture the cold, bleak landscape and the hardy residents who brave unimaginable conditions.

Oymyakon weather played hell with Chapple’s camera. He faced unending challenges while shooting. “There was a lot to learn, it took several days to figure out some tricks to be able to keep working,” he said. “From the moment I left the hotel in the morning the temperature of the camera would begin to drop. Once the guts of the camera froze, that was it for the day.”

In 2005, Chapple took a full-time position shooting UNESCO World Heritage sites. He went freelance in 2012 and is a regular contributor to the Guardian, the Atlantic and Italian Vanity Fair.