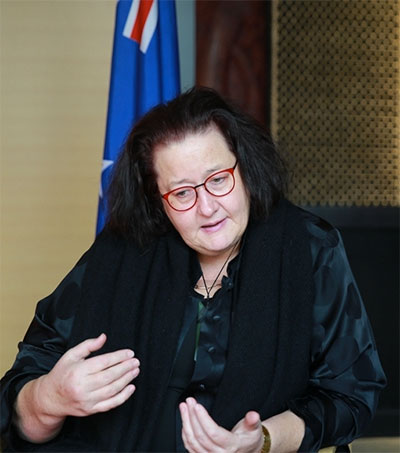 The changes that have taken place in China in the past 70 years are very significant, New Zealand’s Ambassador to China Clare Fearnley has said in a recent interview with Xinhuanet. The ambassador also highly commended China’s achievements in poverty alleviation and other areas.

People have many more economic options, she noted, and different sorts of aspirations that would not have been imaginable in the mid 1980s when she had her first engagement with China are now possible for an increasing percentage of China’s population.

She held that the lifting of over 700 million people out of poverty over the last 40 years has had a huge impact on the region, the world as well as China itself.

The ambassador expressed her interest in the ongoing Two Sessions, as she said China’s prosperity, stability and well-being are of importance to all countries of the region, including New Zealand.

She pointed out that China and New Zealand have each identified poverty alleviation as one of the nations’ top domestic priorities to work toward.

“We look at China’s objectives around poverty alleviation and can see areas where we can share experience and work together,” Fearnley said.

The ambassador told Xinhuanet that the two countries have an extensive framework for cooperation in agriculture, which can address rural poverty, particularly in remote areas.

The ambassador shared her knowledge on a number of cooperation projects in the fields of scientific research and development as well as film industry between China and New Zealand.

“There are lots of areas where we can work together, some traditional, some new, modern and less traditional,” she concluded.