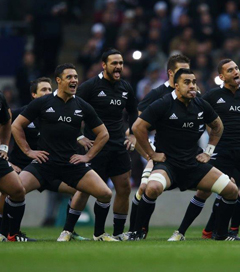 All Black Greatness to be Tested

The mantle of greatness hangs easily around this year’s unbeaten All Blacks as they prepare for a tour of Japan, France, Britain and Ireland. Not that you would know it from the demeanour and utterances from the side’s leadership team. There is no chest-beating because they’ve been here before – unbeaten in 2012 until they came unstuck 38-21 against a combative English team at Twickenham.

France, England and Ireland each possess the ability to challenge All Black supremacy, coach Steve Hansen believes: “England this time last year beat us, so I don’t think we’ve got any right to be going around thumping our chests saying we’re unbeatable.”

The memory of a competitive French side earlier this year is also fresh and “on their own patch they will definitely be strong,” he adds.

New Zealand, says the New York Times, remains the benchmark in international rugby, as evidenced by its 30-test unbeaten run dating back to 2003. What makes 2013 so special, however, is that the unbeaten run was achieved mostly without its two best players: captain Ritchie McCaw and first five Dan Carter.

But Hansen believes his team still has plenty to improve upon, pointing to the tries that should have been scored against Australia in their dominant 41-33 victory in Dunedin. The set piece was also less than perfect, the coach added.

The All Blacks kick off their northern hemisphere tour with a game against Japan this weekend.