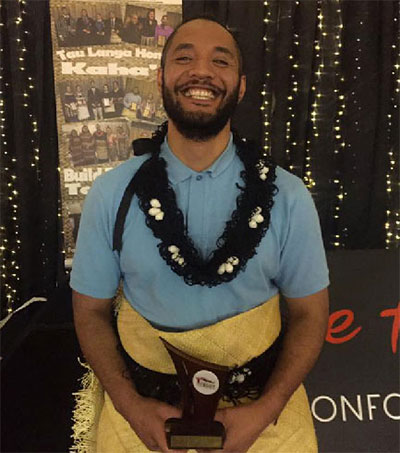 Albert Mateni Brings the Hearts of Men to Life

New Zealand-born Tongan, Albert Mateni, 26, aims to inspire Pacific youth with his play, Hearts of Men set to debut on 5-14 April at the Mangere Arts Centre in Auckland.

Affected by the suicide rate within the Tongan community, Mateni wrote the play to inform young people that the only thing preventing them from reaching their dreams is themselves. It as another version of a motivational speech that he believes young people can understand and absorb, and he is grateful to finally see it come to fruition.

“Now that it’s getting closer I’m really nervous and excited at the same time. I’ve waited so long to bring this play to life,” Mateni told Matangi Tonga.

Hearts of Men has earned Mateni the 2018 Tongan Youth Trust Excellence Award Arts & Music and it was shortlisted in New Zealand’s Playwright B4 25 Competition 2016. It is about the journey of a young Tongan man living in New Zealand with a dream of winning gold for his country at the Olympics. However, life hits him with a punch he never expected and puts his dreams, his heart, his will, and his faith to the test.

Mateni, who suffers from a medical condition and works full-time in banking, wrote the play over five years, in his spare time during his lunch breaks, and on weekends when he wasn’t playing or training for rugby.

Unable to win any funding grants to bring his play to life, his strong desire to see it on stage lead to paying the cast, venue, refreshments and other theatre expenses out of his own pocket.

“I decided to fund the project myself because I feel we needed real stories on stage to represent our people in a different light. Stories that address issues within our community and stories that will motivate others.”

Mateni graduated from the Pacific Institute of Performing Arts in 2011.