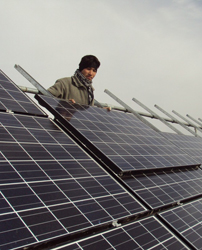 Founder and CEO of Kabul-based renewable-power firm Sustainable Energy Services Afghanistan (SESA) New Zealand-raised Tony Woods says helping the poor was never his primary goal; he came to the energy business — and Afghanistan — circuitously. Born in the US and trained as an engineer, he had noticed nonoperational micro hydropower generators while biking through Pakistan. (He was en route from South Africa to China.) After the trip, he put together a proposal for New Zealand Aid and got hired as a consultant to return to Pakistan and fix them. In 1999, he made his first visit to Afghanistan. On that trip, Woods had an epiphany: Afghanistan seemed perfect for renewable energy. The only thing it did not have was someone who was willing to take on the challenge of harnessing its natural resources and turning them into locally distributed, grid-free sources of electricity. So in 27, he moved to Kabul and founded SESA. “We’re willing to do this where nobody else wants to go,” he says. “We’ve always been about helping – we grew out of the development field – but we are unashamedly commercial.”