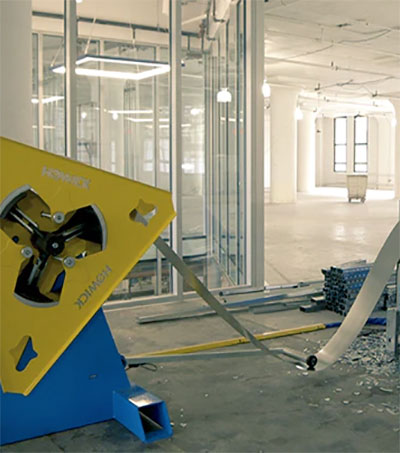 Together with New Zealand-based steel framing machinery designer and manufacturer Howick, Massachusetts company Windover Construction are renovating a century-old YMCA building in the US city of Beverly. By way of an Autodesk programme, Windover sought assistance from Howick because of some “unique” challenges, Nate Berg reports for Fast Company.

A laser scan revealed at the outset of the project that nearly every ceiling in the building was slightly uneven, Berg reports. Reframing the walls of the building would require hundreds of different sized studs. Building them on site would be a complicated nightmare, Berg writes.

In collaboration with Howick, Windover fed their laser scan data into an automated steel frame fabrication machine that precisely produced light gauge steel studs and panels for the building.

The machine also added one critical feature. The new studs are able to telescope, shrinking down to more easily transport into and through the tight spaces of the historic building, and then expanding out like a shower curtain rod slotted into place. “It’s really transforming the way we work in existing and old buildings,” Windover Construction vice president Amr Raafat says.

Windover and Howick came together through an Autodesk programme, realising one had technology that could solve the problem of the other.