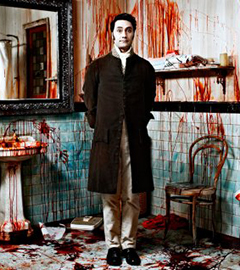 Acclaimed New Zealand auteurs Taika Waititi and Jermaine Clement are garnering rave reviews for their vampire mockumentary, What We Do In The Shadows, which has premiered at the Sundance Film Festival, America’s finest showcase of independent cinema. It is pitched as a reality TV show, in which four vampires struggling to cope with modern society share a flat and argue over who’s going to clean up the blood.

The Hollywood Reporter’s John DeFore says “what we have here is an undead edition of The Real World”.

Vampiric folklore is exploited to good effect. Vampires can only enter a building by invitation, so the quartet’s attempts to score some virgin blood at a nightclub is problematic given the doorman is a bruiser bouncer. Perhaps the yak-hair coats and leather pants were inadvisable nightclub attire.

Then there are the philosophical differences over house manners. Viago, as a dandy, is fastidious about putting down newspaper before feeding so as to protect the furnishings. Vlad, by comparison, treats flesh like John Belushi at an all-you-can-snort cocaine buffet.

Another mortal (Cori Gonzalez-Mauer) is converted to the ranks but, alas, invites a human (Stu Rutherford) round to hang out. Clement and Waitii, credited as writers and directors of the film produced in conjunction with Will Farrell’s Funny Or Die website, even manage to cram in peace-loving werewolves and zombies before the end.

“What We Do In The Shadows,” writes DeFore, “belongs to the creatures of the night, and anyone intending to hop on this particular subgenre bandwagon has a hard act to follow.”