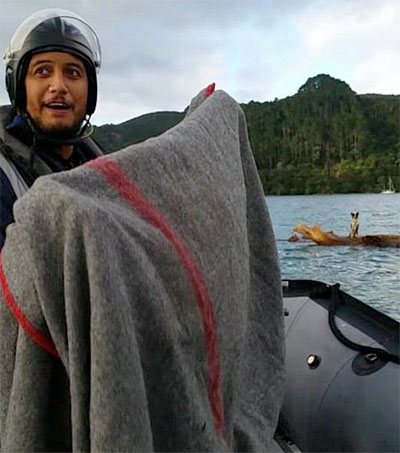 Operation Dog on a Log Rescue a Naval Success Story

The heartwarming rescue by the Royal New Zealand Navy of a dog on a log has gained international media attention.

“This is the astonishing scene that greeted sailors on a New Zealand naval ship – a dog standing helplessly on a drifting log,” the Daily Mail reported.

“It was spotted by the crew of the Hawea in Smokehouse Bay, east of Auckland.

“The black and white dog was spotted by Able Seaman Combat Specialist Filipe Latu who immediately consulted his commanding officer.

“Operation dog rescue was activated with speed and naval efficiency.

“One of the vessel’s rigid-hulled inflatable boats, with four sailors on board, was launched and the dog was more than happy to clamber aboard.

Fox News reported that the Navy officers brought the dog ashore where some bystanders identified its owner.

The dog’s owner, 20-year-old crayfisherman Ben Ngawaka, told the Herald on Sunday that the dog had jumped off his boat when Ngawaka stopped to pick up a piece of wood he thought would be helpful for boat repairs.

Ngawaka was amused to hear how popular the story about his dog had become, but not entirely surprised.

“How often do you find a dog floating on a log in the middle of the ocean?”