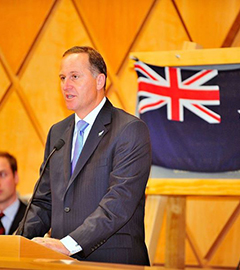 British BBC readers overwhelmingly support New Zealand ditching the last official remnant of its colonial past. A referendum will be held at this year’s election on whether to change the flag, which features the Union Jack in the left hand corner, reports the BBC, quoting Prime Minister John Key, who favours a new design.

“Time to stand up and wear the big boy pants,” writes MidAtlantic on the network’s website. Adds Steve Ingram: “Why shouldn’t they. Good luck to them … we Brits should fully support them,” while Sine Wave asks why would “a completely independent nation still use the Union flag inside their flag?”

Others took a facetious approach: “I hope [Foreign Secretary] William Hague will condemn the New Zealanders and say how no-one will recognise their referendum,” suggests Frowny Face.

Key, who announced an early election date of 20 September (when elections are traditionally held in late November), says the present flag represents a period of history from which New Zealand had moved on.

But the Prime Minister was adamant changing the flag did not mean cutting ties with the British monarchy: “We retain a strong and important constitutional link to the monarchy and I get no sense of any groundswell of support to let that go.”

While the British are sanguine about New Zealand dispensing with the Union Jack, support for a change remains muted. Last month’s poll, following Key signalling the referendum, showed only 28% supporting a change, compared to 72% who were content with the present emblem.

Last word to BBC reader ‘sorrysorryandsorry’: “The Kiwis are wonderful people and a great ally. And even though we share a gastronomic heritage in the form of Marmite, we wish them all the very best with their new flag.”