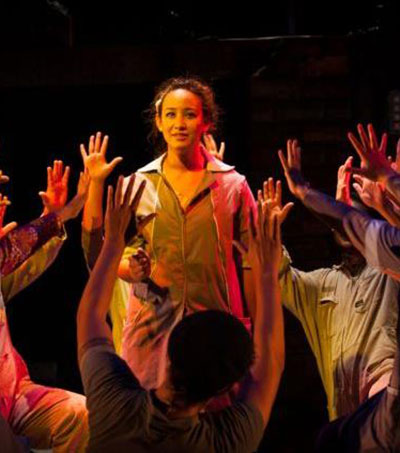 One of these acts is The Factory – described as “the Pacific Les Mis” – exploring the difficult lives of Samoan immigrants to New Zealand.

In an interview with The Guardian, director Vela Manusaute is described as “getting misty-eyed” as he talks of his pride in being in Scotland, the country of one of his heroes, “the greatest of story-tellers” Robert Louis Stevenson.

The Factory is just one part of New Zealand’s biggest ever cultural charge to Edinburgh, with around 240 of the country’s performers appearing across the entire festival.

New Zealand has a regular presence at Edinburgh in August, just not on this scale.

Dick Grant, the chairman of Creative New Zealand, said the project to bring the performers, NZ Edinburgh 2014, had been two years in the making.

“It is the largest group of leading New Zealand actors, dancers, musicians, visual artists, writers, Maori performing artists, producers and helpers that we have ever taken abroad – ever.” Grant said.

The Factory comes to Edinburgh fresh from a tour in Australia and it came about because of his mother, said Manusaute.

“She told me I should stop doing meaningless comedy work … which offended me. It was like ‘what do you mean, meaningless!'”

Manusate’s company, Kila Kokonut Krew, had been going 10 years and it was time to do something big, something which felt important, he said.

First performed on a shoestring in a tiny theatre in south Auckland, one of New Zealand’s roughest suburbs, The Factory tells the stories of Samoan immigrants to New Zealand who ended up in textile factories and on society’s bottom rung.

It is still a work in progress but the show’s producers have high hopes of bringing it back to the UK on tour as well as taking it to the US.

Producer William McKegg said while it was fun and entertaining, it was a show with purpose.

“It is a story about the difficulties and the disappointments and ultimately the redemption of being an immigrant to a new country.”

Other New Zealand performances include around 25 Haka performers, a production called Black Faggot which explores what it is like to be young, Samoan and gay and an immersive show titled The Generation of Z where audience members can expect to be chased by zombies.