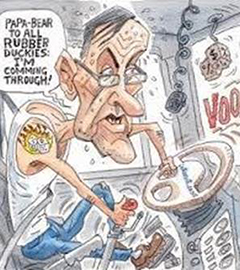 Many strange things are used to measure economic growth and decline: the lipstick economy, the horse-trading economy, the Playboy economy (curves in recession, skinny in boom times) and even underwear, as Fed chairman Alan Greenspan once famously outlined. But a new measure, developed in New Zealand, is attracting international policy wonk attention because of its ability to accurately predict the state of the economy in the coming months.

The Wall St Journal is highlighting the ANZ Truck-o-meter as a fascinating instrument for economic prediction, adding to New Zealand’s reputation as an innovator in monetary policy and the development of new macro-economic tools.

The Reserve Bank’s monetary policy framework has been adopted by 20 countries and Howard Davies, former deputy governor of the Bank of England, has hailed it as the “originator of inflation targeting”.

The Truck-o-meter, which measures freight movements by road, has proved such an uncanny match to economic activity that the Reserve Bank uses it, among many other measures, when reaching a decision on whether to raise the Official Cash Rate, the de facto determinant of interest rates.

But then New Zealand is also unusual in that 70% of its freight is moved by road. The Truck-o-meter monitors volumes of traffic, from small cars and vans to industrial behemoths across ten roads.

ANZ contends that the heavy vehicles give a snapshot of the economy at that instant, while smaller transport is an indicator of economic output in six months in the future.

While the correlation between large freight movements and GDP is logical, the movement of smaller vehicles is interpreted as consumers and small businesses “putting their money where their mouth is” by buying and driving vehicles. This, in turn, reflects future spending, hiring and investment decisions.

What does the Truck-O-meter say? Much stronger growth in the second half of the year (we’re still waiting for official third quarter GDP results) and next year.

The Reserve Bank may have to act sooner and raise interest rates in December. For every  silver lining, a cloud.