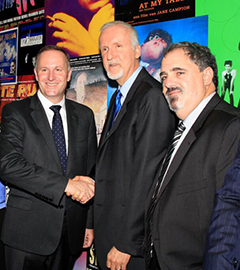 The Government has delivered a huge boost to the New Zealand film industry by cutting a deal with 20th Century Fox that will see the three James Cameron Avatar sequels filmed Downunder. Prime Minister John Key announced that it would increase its financial incentives, described by the New York Times as “eye-popping,” to 25% of the production costs for the three films, due for release at Christmas 2016, 2017 and 2018.

The rebates available to foreign film productions have been lifted from 15% to 20%. An additional 5% rebate is applicable to movies that generate a “specific benefit” to the country, Key said.

Holding the Avatar productions in New Zealand is expected to generate hundreds of jobs, provide succour to an ailing film industry and provide a significant secondary boost to the economy.

But the announcement has caused consternation across the Tasman, where the film industry is also struggling, and sparked a debate about whether Australia should follow suit.

Did the New Zealand film industry just eat our lunch, is the question posed by Melbourne economics professor, Jason Potts, on his blog, The Price of Everything.

Potts pours scorn on the economic benefits that are purported to flow through as a result of the films.

Economic impact studies are to economics what astrology is to physics, he says, which is another way of saying that reports of multi-million dollar benefits have been greatly exaggerated.

It is not the beautiful scenery or the wizardry of Weta that brings the Avatar trilogy to New Zealand, he opines: “No, the simple comparison is that New Zealand is about 20% cheaper than Australia and 30% cheaper than Canada. New Zealand has lower taxes, easy employment conditions and relatively light regulations.

“It’s just easier to get things done there.”

Blogger Ben Eltham, at the excellent Crikey website, dismisses the entire concept of subsidies as a means of creating a self-sustaining film industry. It doesn’t work; it requires constant taxpayer support.

The question, then, is whether subsidies create sufficient value to justify taxpayer expenditure? No, says Eltham. While there are one-off boosts to the film industry itself, the actual economic benefit is little because when other countries, such as New Zealand, offer better subsidies the productions more there.

It is a race to the bottom, he says.

Economic development minister Steven Joyce has been clear the Government inked this deal reluctantly. He too worries about the race to the bottom.

It appears to have been a pragmatic decision, mindful of immediate film sector employment needs, the desire to secure this high profile project and firm eye on what the Avatar series can do for New Zealand’s broader image and reputation.

The Government has used the Lord of the Rings and the Hobbit as a means of branding the country, and sees Avatar, which will feature a New Zealand tourism video on DVD and Blue-ray release, as capable of continuing that international narrative.

These are benefits that can never be quantified in an economic impact report.