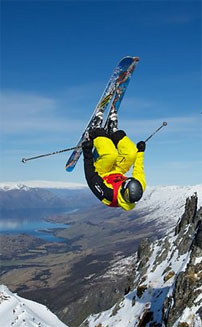 Day two of the 211 World Heli Challenge, held in the Southern Lakes area, from 27 July through 11 August, saw athletes going “huge with awe-inspiring cliff drops that had the spectators…

Four of New Zealand’s top ski and surf personalities have completed a first, travelling the length of the country in five days, skiing a different summit and surfing a different break every day. Coming…

Auckland-based entrepreneur Nick Wood has bought the Teton Pass Ski Resort, west of Choteau, Montana for just under $41, and will spend a further $4 million upgrading the area over the next three years….

Perfection on the Peak

Coronet Peak is an international training hub for the US Ski Team, Swedish, Swiss and Canadian Alpine Ski Teams as they train for the 2010 Winter Olympics in Vancouver. Of course, the New Zealand…

The seven kilometre route to Treble Cone can be unnerving for American travellers accustomed to ample four-lane roads leading to their favourite resort. The gravel road winding up from Wanaka to the ski-field has…