New Zealand’s possum population has halved over the last 20 years down from 70 million in the 1980s to approximately 30 million. Possum control is carried out over 13 million hectares, which is about…

Digging For a Tipple

Next year, a team of New Zealand explorers led by Glenorchy man Al Fastier will head to Antarctica to try to recover 25 crates of rare McKinlay and Co whiskey gifted to Ernest Shackleton…

GNS Science geophysicist Dr Grant Caldwell and colleagues have reported that water deep beneath earthquake zones in New Zealand triggers tremors. Caldwell and his colleagues were able to determine how water is moving and…

A feijoa shaped like New Zealand’s national bird, the kiwi has been bought by a Christchurch businessman for $1000 who says he will preserve the quirky fruit. Auckland woman Shavon Green found the freak-of-nature…

Victoria University glaciologist Dr Andrew Mackintosh has released findings of a study which shows that southern  hemisphere glaciers evolve quite differently to those in the north. “Don’t assume that warming will be uniform over…

26 March 2009 – Helen Clark’s nomination to lead the United Nations Development Program has been officially announced by Michele Montas, spokeswoman for the UN secretary general, in New York today. As the former…

Waitakere City has been using classical music to deter vandals and loitering youth, driving them away from a local transit hub with remarkable success. Bob Harvey, mayor of Waitakere, says there has been no…

ABC’s new series, Legend of the Seeker, is being filmed in New Zealand, taking advantage of the surreal midland setting. “They have a real respect for nature,”says the shows star, Bridget Regan. “We film…

Auckland watchmaker Malcolm Campbell of Timeshop Watch Repairs, who has been in business in a two metre square Lorne Street premises for almost twenty-two years, is now to retire. Campbell told the ABC’s Kerri…

Redback spider numbers are rising rapidly on the South Island as the New Zealand climate becomes warmer and drier. Scientists expect the trend to continue, and for the redback to spread as an increasingly…

Kiwifruit rejected for damage or inferiority is used as cattle feed throughout New Zealand, but Crown Research Institute, Scion and ZESPRI Innovation scientists are reconsidering its use as a potential biogas able to generate…

Christchurch-born evangelist Ray Comfort fronted a controversial debate over the existence of God on US TV this month. Comfort (pictured left) and his preaching partner, child actor Kirk Cameron, squared off against two members…

Praise for Bright and Vital

An ABC Radio report on Wellington’s Pinot Noir festival credits the grape’s – and NZ wine in general’s – explosion in popularity in the US to the success of 2004 indie film, Sideways. “We had $500 million…

Dinosaurs of the South Pacific

The first proof that dinosaurs lived on remote South Pacific Islands has been revealed by Dr Jeffrey Stilwell of Monash University, Melbourne. Stilwell, who trained at Otago University under NZ’s leading palaeontologist Ewan Fordyce, has discovered a…

NZ Supreme Court judge, Sir Kenneth Keith, has been elected to the UN’s World Court, the highest judicial authority in the world. The court, officially known as the International Court of Justice (ICJ), is…

Heir to a Legend 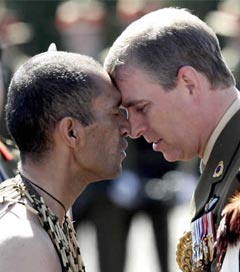 Prince Andrew made a fleeting visit to NZ this month, chiefly to spend time with the army’s Logistic Regiment, which he has headed since 1996. The Prince made international headlines with his humorous interpretation…

Keith Urban up for US music awards

Country music star Keith Urban has four nominations at this year’s Country Music Association Awards. Urban is up for entertainer of the year, male vocalist of the year, album of the year for…

NZ economist Anthony Byett was interviewed on ABC Radio about the country’s booming economy. “We’ve had a great 10-year period, and the last three years in particular have been very strong … We have the economy –…

NZ’s Marine Tourism Holdings is the latest company to set up shop at Queensland’s Great Barrier Reef, offering daily tours to a 45m pontoon based at Knuckle Reef. The pontoon, which houses an interpretive centre and a…

Campaigning at the Source

In innovative anti-drunk driving campaign in NZ has made headlines around the world. Produced by the NZ Land Transport Safety Authority, the large, heat-activated ads are located in urinals in 260 pubs around the country. “What you’ll…

NZ ranked first overall in the World Bank’s  ‘Doing Business’ report for 2004, ahead of the US, Singapore, Hong Kong, and Australia. The annual survey decides which countries are best for doing business in based on…

Doctors at NZ’s Liggins Institute have made a crucial breakthrough in the study of breast cancer. Researchers have discovered a growth hormone in breast cancer cells which determines how quickly the cancer spreads. “We have found a…

NZ performers Teddy Tahu Rhodes and Ross McCormack were commended at the annual Helpmann Awards in Sydney, August 10. Rhodes was named Best Male Performer in an Opera for his lead role in…

Auckland University student John Chen was the overall winner at the 8th Sydney International Piano Competition, held June 30 – July 17. The 18-year-old competed against 36 rigorously selected players from around the world,…

Minister for research, science and technology, Dr Pete Hodgson, headed an impressive delegation of NZ scientists and executives at the annual Biotechnology Industry Organisation (BIO) meeting in San Francisco. In the course of the conference NZ and Australia…

BECA at the Helm

NZ engineering company BECA International has won a lucrative contract from the Marshall Islands government to oversee US-funded construction projects worth US$14 million. Most of the funding has been assigned to new educational and healthcare facilities.

Call of the Wild

Ngati Tuwharetoa leader, Tumu Te Heuheu, has been elected to represent all Pacific nations on the UN’s World Heritage Committee. NZ beat more than 20 other countries to win one of 8 seats on offer. The…

Robin Williams: “I Realised I Could Fall Out of Jonah’s Nose …”

Jonah Lomu has announced his withdrawal from this year’s NPC competition, and has given up any hope of making the 2003 World Cup squad. The most famed of wingers has experienced foot and calf muscle problems…

Passengers May Remove Their Safety Belts?

The effects of war and the SARS crisis on tourism and travel may be looming for global airlines, but presently Air NZ is bucking the global downturn. The carrier recently reported a half-yearly net profit of…

Aotearoa-Pasifika artist Michael Tuffery talks to the ABC about recycling identity. Tuffery has recently completed an artist’s residency at Artspace Mackay in Queensland, Australia, where he ran a series of workshops for aspiring artists…

Golfer Philip Tataurangi had the first US PGA Tour win of his career at the Las Vegas Classic, beating Australia’s Stuart Appleby by one shot. The 32-year-old pulled out his best round ever – 10 under…

New Zealand’s health minister Dr Annette King calls on the world not to neglect the small island nations of the Pacific in the fight against HIV/AIDS.

Bi-lateral trade between New Zealand and Singapore grew 35% from January to February, following a free trade pact which kicked off at the beginning of the year.

New Zealand’s cabinet rulebook gets an overhaul to make it coalition compatible.

Standard and Poors lifts New Zealand’s long-term foreign currency credit rating to stable on the back of a government surplus and declining debt burden.

New Zealand representatives at the International Whaling Commission are keeping up the pressure for a South Pacific Whale Sanctuary.