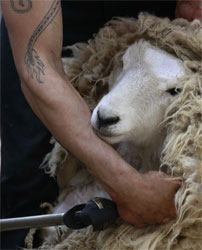 New Zealand Federated Farmers says sheep shearing has the potential to become an Olympic demonstration sport. The “time has come to elevate shearing’s sporting status to the ultimate world stage,” the organisation said. New Zealand produces some of the world’s best shearers and its national championship, the Golden Shears, receives substantial media coverage in the country. New Zealand will host the world shearing championships in March, and Federated Farmers Meat and Fiber chairwoman Jeannette Maxwell said it was an appropriate time for the sport to press for wider international recognition. Maxwell said men’s and women’s world record-holders, Kerri-Jo Te Huia of New Zealand and Ivan Scott of Ireland, showed the athleticism necessary to reach the top of world shearing. “Kerri-Jo smashed the women’s eight-hour solo lamb shearing world record by shearing 507 lambs, 37 more than the previous record,” she said.