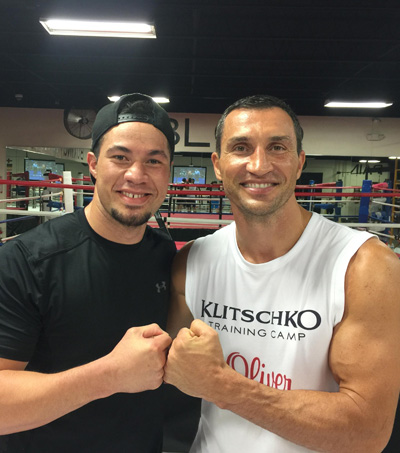 Undefeated #10 WBA heavyweight contender Joseph Parker has been helping out heavyweight champion Wladimir Klitschko with his sparring to get him ready for his upcoming fight against Bryant Jennings.

“He’s extremely talented. He’s strong (…), determined and very tough. I see myself in Joseph in a certain way. I can’t say anything negative” Klitschko told ESPN.com after sparring with Parker at least 12 rounds.

Wladimir should be concerned about how he’s going to do against the talented Bryant Jennings on April 25th, because Jennings has the kind of power, speed and talent that can give Wladimir fits.

According to ESPN.com “Klitschko likes to be pushed, which is why he has used recent training camps to bring in hungry, young fighters with enormous potential to spar with him.”

Wladimir is currently preparing for his fight against the long-armed, combination throwing Bryant Jennings on April 25th at Madison Square Garden in New York.

In recognition of Rotorua-born squash player Susan Devoy’s exalted status PSA website caught up with the sport’s only ‘Dame’, who ranks only behind the great Heather McKay and Malaysian legend Nicol David…