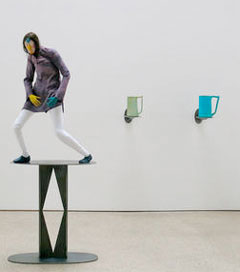 New Zealand artist Francis Upritchard’s full-scale New York gallery debut has opened at Anton Kern. Art Daily reports: “London-based [Upritchard] who represented her country at the 2009 Venice Biennale – stages eight figurative sculptures seemingly engaged in a ritualistic war dance. Quite unlike the traditional fierceness of such stylised warfare however, Upritchard’s figures appear to prepare for a different kind of battle, showing off skills of a different nature. Stance, expression, and garb of these delicately modeled sculptures are focused yet tender and soft, at times leaning towards awkward, limp and visceral. Gestures, especially of the hands and elongated fingers, suggest a determined dreamy-ness and wistfulness. The figures’ skin is built up as if made of wax; their facial expressions and half-closed eyes are introverted and withdrawn. All in all, these dancers move closer to the delirious state of a rave than the ferociousness of mock combat. Alluding to a variety of cultural and temporal influences, Upritchard’s work intimates how effectively the past can be reinterpreted, even manipulated. Here, the artist takes inspiration from medieval sources such as the 11th century Bayeux tapestry as well as the woodcarvings by Northern-Renaissance sculptor Erasmus Grasser, whose work captured the Moresca pantomime and its origins in the sword and mumming dances performed by troupes of jesters and actors at court and in the streets. Upritchard’s work has most recently been featured in solo exhibitions at the Marugame Genichiro-Inokuma Museum of Contemporary Art, Japan (2013); Nottingham Contemporary, UK (2012); and Cincinnati Contemporary Art Center, Cincinnati (2012).