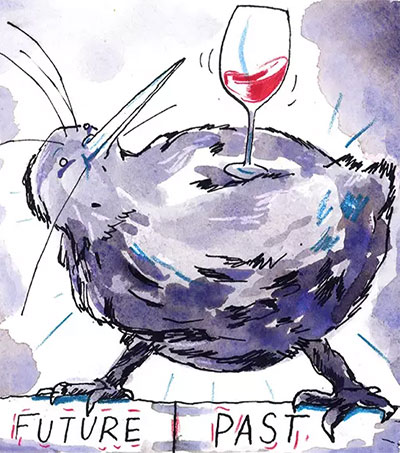 Wine Producers Balancing the Old with the New

New wave wine producing has been “unusually slow” to catch on in New Zealand, according to British wine critic Jancis Robinson, “even though the country’s wine business is enjoying an unprecedented level of self-confidence.”

“The ‘cultural cringe’ of yesteryear has been replaced by unrivalled export success for its flagship Sauvignon Blanc, and by the continuing emergence of regional styles in its signature red wine grape, the fashionable Pinot Noir,” Robinson writes for the Financial Times.

“Is this because New Zealand is a small, conservative country whose producers prefer to concentrate on dependable versions of their most popular wine style, Sauvignon Blanc? The Kiwi wine scene has long been dominated by a handful of big companies and that may tend to stifle experimentation. Jane Skilton, a New Zealand-based Master of Wine, writer and educator, thinks it may also be because ‘we lack cities with big enough populations to fully absorb experimental wines – unlike Australia’.

“[Winemaker] Alex Craighead, 35, is a possibly odd exception in that he, though Australian-born, determinedly makes his range of New Zealand wines with minimal intervention. So does he make natural wines, I asked. He sighed and explained, ‘I prefer the term living wine. It’s less confrontational. And, anyway, those sorts of wines are not the only thing I drink.’ He admits that his approach has drawn some negative reactions. ‘You need a thick skin, but I’ve noticed more positivity about this last year. And we’re starting to get on restaurant wine lists.’

“But as in the rest of the wine world, conventional winemakers are starting to be tempted to try some of these new/old techniques. Helen Masters, the wizard at the Ata Rangi winery in Martinborough, experimented with macerating a few Sauvignon Blanc grapes with the skins for up to six weeks in her 2014 vintage, ‘to try to capture the flavour and phenolics of the grape’. In 2015, she increased that from 5 to 7 per cent, a sign of approval of the technique, which results in a wine far more complex than the average Marlborough Sauvignon Blanc.”