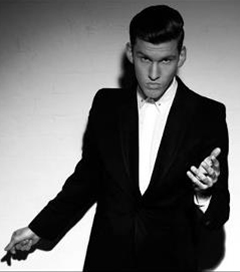 Kiwi 50’s revivalist singer Willie Moon’s debut album, Here’s Willy Moon, shows ‘wit’ and ‘invention’, according to The Observer. Described by the same paper in 2011 as ‘one to watch’, Moon combines ‘rootsy rock and roll with the production dazzle of 00s hip-hop and dance music,’ says critic Ally Carnwath. Moon’s music ‘dares you to call it something horrible like rockabilly dubstep.’ But, ‘don’t wince,’ says Carnwath; ‘his debut album works far better than it should.’ Moon’s has a ‘mating-call holler’ on I Wanna be Your Man, Carnwath’s favourite track, described as having ‘fidgeting beats, twanging guitars and fairground synths.’ Elsewhere, says Carnwath, the album shows ‘plenty of the same wit and invention.’ Moon’s debut scored three stars out of five from The Observer. Moon, a Wellingtonian, is signed to the Universal/Island label. Jack White of The White Stripes is a huge fan. Moon’s rise began when Apple used his song, Yeah Yeah, in its commercials. He has appeared in the New York Times, Vogue and Q, and on The Tonight Show with Jay Leno. The UK Guardian also gave Moon’s debut album three stars.