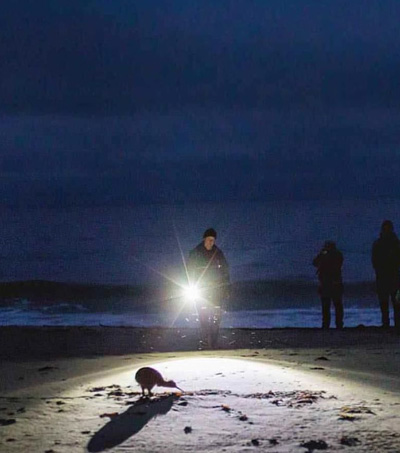 The Kiwi bird might be New Zealand’s national emblem, “but few New Zealanders have even seen the usually nocturnal flightless bird,” as reported in an article in the South China Morning Post. A night time tour on Stewart Island in the far south of New Zealand allows visitors to see the kiwi birds.

Kiwi birds “have large ears for a bird, so our group of eight is walking as silently as possible in single file along the sandy track from our boat landing at Stewart Island’s Glory Cove. It’s night, which is when the bird will be out and about. I didn’t imagine we’d go looking for it on a beach – the kiwi is usually a forest dweller,” writes the South China Morning Post contributor who took the night time tour.

On the tour the group spotted one male kiwi “running from heap to heap, searching beneath the kelp for sandhoppers with its narrow 10cm beak,” as well as one female bird.

“Found only in New Zealand’s Fiordland and on Stewart Island, the South Island brown kiwi is the largest, and intriguingly, the only one that continues to live with its family group,” according to the article.

“While other kiwi species are strictly nocturnal, the Stewart Island birds are active during the day too, so you have more chance of seeing one in the wild here than anywhere else.”

“There are about 70,000 kiwi in New Zealand, of which 30,000 are South Island brown kiwi, and 16,000 of those live on Stewart Island, the country’s third-largest and southernmost island.”

All five kiwi species “are at varying stages of population risk with the overall kiwi population in a steady decline (currently two to three per cent per year), due to habitat loss and predation, according to New Zealand’s Department of Conservation,” reports the article.

“More than a national emblem, the kiwi is a talisman, both to Maori and non-Maori New Zealanders. To the Maori, it’s the hidden bird of Tane, god of the forest. For the non-Maori, the flightless bird represented the country’s unique wildlife, and the kiwi image has become widely symbolic of the nation, since it first appeared on military badges in the 1880s.”