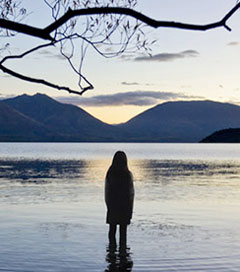 Why Hollywood is Staying in New Zealand

“From James Cameron’s organic farm to Emmy contender Top of the Lake, the idyllic island nation continues to thrive 12 years after Frodo and Co. put it on the movie location map,” The Hollywood Reporter’s Pip Bulbeck writes. “When Peter Jackson unveiled the first installment of his The Lord of the Rings franchise in 2001, the question at the time was whether the director’s native New Zealand could maintain the momentum of LOTR and continue to lure big-budget shoots. Twelve years later, Hollywood’s New Zealand love affair shows no signs of slowing. Four reasons why, No 1: It’s more than Middle Earth. If being home to LOTR was the mantra of the first decade of the 21st century, now projects like Jane Campion’s moody mystery Top of the Lake are moving in, delving deep into places like Lake Wakatipu, which is surrounded by foreboding mountains. Says Lake co-star David Wenham: ‘Jane wrote scenes with specific locations in mind. Even though it’s extremely beautiful, it’s ominous as well. I’m slightly claustrophobic, and I wanted to escape. In this series, this environment does enclose.’ No 2: The can-do Kiwi spirit. New Zealanders are famous for a ‘nothing is a problem’ view of life. ‘When you work in America and a bit in England, there’s an awful lot of people going, “Oh that’s not my department, I can’t do that,”’ says director Peter Webber, who spent more than a year making the Tommy Lee Jones starrer Emperor in Auckland and Wellington. ‘I didn’t find any of that here at all. The lack of hierarchy is very down-to-earth.’ No 3: Cameron loves the peace and quiet. He may have reached the depths of the ocean floor this year, but James Cameron has his feet firmly planted in New Zealand. He spent 2011 and 2012 purchasing farmland just north of Wellington, which he calls his own Pandora. The committed vegan wants to establish a sustainable, organic farm where he can also write his Avatar sequels. ‘I’m actually over here writing because I need some peace and quiet,’ he said at the premiere of The Hobbit: An Unexpected Journey last year. ‘Unfortunately, it’s distracting because it’s so beautiful.’ No 4: There’s wine! A benefit of all the shooting in New Zealand: Actor Sam Neill and director Roger Donaldson have pioneered the local entertainment industry’s move into winemaking. The New Zealand residents set up the Two Paddocks label in Central Otago.”