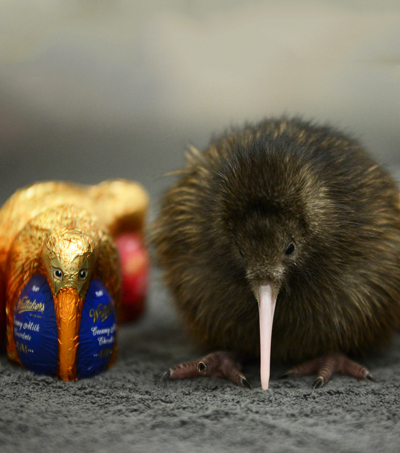 Whittaker’s Partnership With Kiwis For Kiwi

(SPONSORED CONTENT) – Iconic New Zealand chocolatier, Whittaker’s, is again partnering with Kiwis for kiwi to raise funds for the Operation Nest Egg initiative, which aims to help reverse the decline in kiwi populations.

Operation Nest Egg sees vulnerable newborn kiwi raised in a safe environment until they reach a ‘stoat-proof’ weight (around 1kg), before being released into predator-controlled areas to encourage growth and reproduction.

It is community-led and involves monitoring kiwi populations, facilitating breeding programmes, removing predators from kiwi habitats, and ongoing fund-raising.  Operation Nest Egg has been hugely successful in growing kiwi numbers, with around 200 kiwi returned to the wild each year.

Whittaker’s is donating 20 cents from the sale of every limited-edition Whittaker’s Chocolate Kiwi, a hollow and foil-wrapped product made just for Easter, and is committed to donating $80,000 to Kiwis for kiwi for Operation Nest Egg. It’s the Easter treat for those wanting to support a great cause.

Whittaker’s donation to Kiwis for kiwi and Operation Nest Egg last year enabled 66 kiwi chicks to be successfully hatched and released through the programme.

Whittaker’s Marketing Manager, Holly Whittaker, said, “It’s really exciting to have such a clear link between our donation and the number of kiwi chicks that helps save, and supporting Kiwis for kiwi feels like a natural fit for us as a proud New Zealand company.”