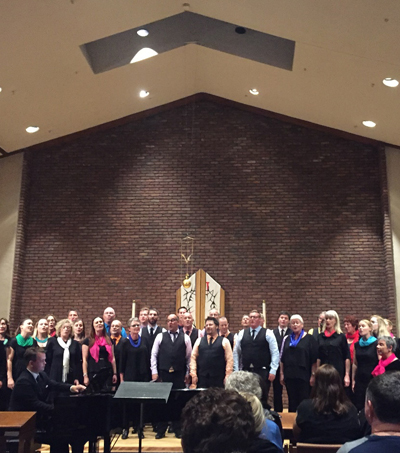 Christchurch’s Vocal Collective – on tour to perform at Carnegie Hall as part of a global choir – tonight sang an emotional and inspirational concert at St John’s Church in Greenwich Village New York. The Voices of Unity Memorial Concert was a touchpoint for New Zealand New Yorkers after the March 15 massacre, as the Vocal Collective performed songs by local heroes – Bruce Springsteen’s Rising, Simon & Garfunkel’s Bridge Over Troubled Waters and Billy Joel’s New York State of Mind, and New Zealand laments – Pokekarekare Ana and Hine E Hine. The 40 singers were led by Matthew Everingham, musical director, composer and pianist. The audience held silence for two minutes in sync with the silence observed across New Zealand as part of a national day of reflection following the attack on two mosques during prayer.

The Vocal Collective will join singers from the United States, Croatia, Ireland and Hong Kong on the Carnegie Hall stage, as part of TotalVocal, an annual showcase of accapella-style singing. Last evening they performed in Washington D.C. with local choirs. Affinity Choir, and all-women group of singers from Cardiff, Wales, also performed.

The Vocal Collective was formed as the Christchurch Pops Choir, which rose like a phoenix in the aftermath of the February 2011 Christchurch earthquake when established venues for singers were in disarray. In June 2011 a group of music lovers and singers got together and inspired by inaugural artistic director Luke Di Somma, set out to create a new kind of choir. This group would sing ‘popular’ songs that would not only raise the spirits of its members, but more importantly, entertain the people of Canterbury and give them a reason to smile again. In this way the choir would play an important role in rebuilding the heart of the broken city.

After March 15, their healing powers are ever more needed.