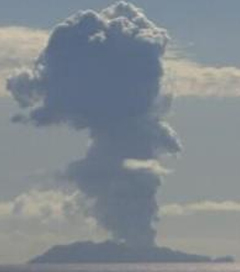 Volcano off the Bay of Plenty Coast Erupts

White Island, a volcano off the coast of Bay of Plenty, erupted yesterday morning, sending a plume of steam two kilometres into the air. The eruption happened about 10:23am, lasted only a few minutes and released mainly steam. “The eruption appears to have continued for about 10 minutes and mainly produced steam,” the GNS Science (GNS) said.

Regardless, the GNS raised the alert level for the volcano from one to two – meaning a minor eruption is in progress. The aviation colour code went from green to red, though the Civil Aviation Authority (CAA) spokesperson Matthew Shore said no advisory warning was issued to aircraft.  “GNS has reported that the eruption is steam, with virtually no ash, and so poses no risk to aviation.”

White Island sightseers are being warned another eruption could occur “at any time with little or no warning”.

White Island has experienced several minor eruptions over the last year. GNS Science volcanologist Craig Miller said that volcanologists have found magma “very near” to the surface of the volcano.

Miller did not rule out the eruption being part of a sequence leading to a bigger eruption. “I don’t think we could rule out future events at all…We’re not expecting it to stop in the next day or two. The question is whether this is ramping up to a bigger event. That’s something we’ll be discussing amongst ourselves and alerting the public to once we’ve made our conclusion.”

Miller said that an eruption would be unlikely to affect the Bay of Plenty – though would be dangerous to anyone on White Island.

The volcanic activity is not believed to be related to a 6.5-magnitude earthquake which rocked Wellington on Friday.