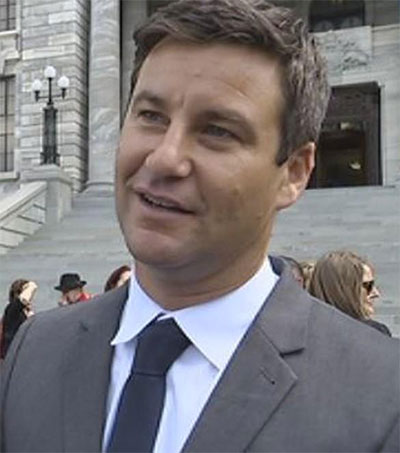 Clarke Gayford, host of televisions series Fish of the Day and partner of New Zealand Prime Minister Jacinda Ardern, describes life with bodyguards, a state mansion and a call from Donald Trump in an article for local news site The Spinoff.

“I’m sitting here in the barely settled dust of the last couple of months feeling guilty about my past flippant use of superlatives. I’ve been forced to rethink applications of words like ‘surreal’, ‘life-changing’ and ‘bananas’,” Gayford, 40, writes.

“To be fair I’d had a small taste of the changes to come … I mean it’s hard not to notice when your partner suddenly has three suited, handsome, well-trained (and groomed) men following her every move. Meanwhile I didn’t even own a proper suit, although I have since remedied this – via Hallensteins.

“From a media perspective I’ve also found it equal parts fascinating and frustrating watching journalists translate reality into their own words.

“Especially knowing the facts around the event described and then watching and reading their interpretations of it. This reached a deafening cacophony in the last gasps of the campaign as normally calm and measured reporters moved from 5 to 9 on the scale. All in the madness of being heard.

“So I guess the plan from here is to keep life as normal as possible for us both. I don’t think the boy from Gisborne and the girl from Morrinsville will find this all too difficult.”

Original article by Clarke Gayford, The Spinoff, The Guardian, November 7, 2017.