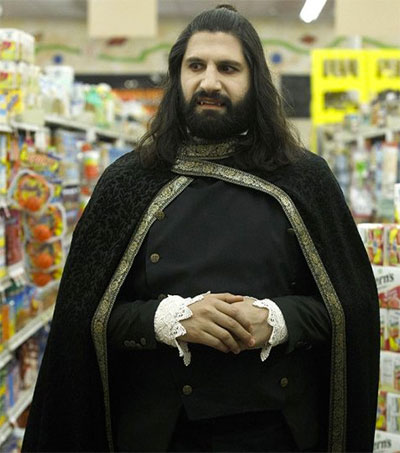 What We Do in the Shadows on TV and Note-Perfect

Taika Waititi and Jemaine Clement’s TV reboot of their vampiric comedy, What We Do in the Shadows is “wonderfully, absurdly over-the-top and hilarious”, according to Hollywood Reporter reviewer Tim Goodman.

“There is a point early on in [American pay television channel] FX’s newest comedy What We Do in the Shadows, based on the acclaimed feature film about, well, funny vampires who take part in a documentary, where you wonder through the best of the hilarity if a 10-part series can keep up this level of creativity,” Goodman writes.

“After all, you really have to be all-in on the concept, since being ridiculous and silly are essential elements, but one after another, little bits of unexpected ideas drop into the mix and alleviate all worry.

“Clement is creator, writer and executive producer of the TV series, while Waititi is executive producer and director, with Paul Simms as writer and executive producer. The trio realised smartly that the concept would work as a TV series and they are aided by an excellent cast, including Kayvan Novak as Nandor the Relentless, a warrior from the Ottoman Empire and something of the lead vampire in the Staten Island house where they all live; Matt Berry as Laszlo, ‘a rogue, a dandy and a fop’ from England; and Natasia Demetriou as Nadja, the Eastern Bloc seductress and easily-annoyed vamp with deep wisdom.

“There’s nothing else quite like it, adding a freshness to the comedy selection on TV.

“Maybe the comedy will be immortal, who knows? At least through the first four episodes it’s note-perfect. FX has seemingly unearthed another gem.”

In another review, IndieWire’s Ben Travers writes: “Jemaine Clement’s TV show is alive with possibilities, and keen to find humour in every corner of its idiosyncratic vampire world. In the first half of its debut season, the creator (along with producers Taika Waititi and Paul Simms) moves rapidly through his new characters, setting, and individual plots, building anticipation as efficiently as he elicits laughs. There’s still room to grow, but Clement’s adaptation gets a lot of the finer touches just right, straight off the bat.”

The series premieres on FX on 27 March.

Tags: Hollywood Reporter  IndieWIRE  Jemaine Clement  Taika Waititi  What We Do in the Shadows