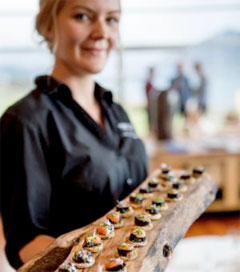 Wanaka’s Whare Kea Lodge restaurant is one of the world’s best hotel restaurants according to the Sydney Morning Herald’s Ute Junker. It is included alongside New York’s Nomad Hotel and London’s Mandarin-Oriental Hotel, where Heston Blumenthal holds fort at Dinner.

“It’s a rare hotel where you feel comfortable popping into the kitchen in the morning to ask for a coffee, but then, staying at Whare Kea Lodge feels more like staying with super-wealthy friends,” Junker says.

“Which is what you are doing, sort of: the six-bedroom lodge was once the Myer family holiday home and has retained that laidback vibe. Meals are served at a communal table and feature whatever chef James Stapley feels like serving up. That could include delicious Bluff oysters, a salad of West Coast crayfish and homegrown heirloom tomatoes, wild Fiordland venison, or the bite-size beignets. Best of all, Stapley likes to please: following our raptures over the beignets served for dessert, he whips us up another batch the next morning.”

United Kingdom-born Stapley will be joining some of the globe’s most inspiring culinary stars at this year’s MasterClass at the Melbourne Food & Wine Festival.  He is the only chef from New Zealand to have been invited to this prestigious event for 2014.