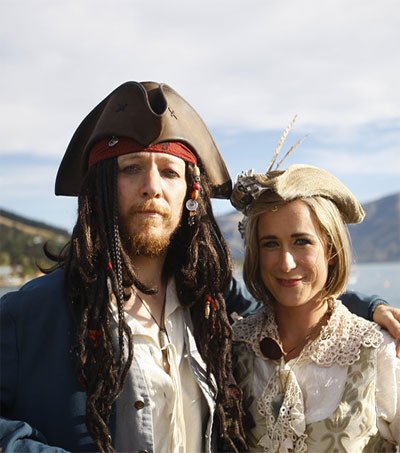 The world’s first official Pastafarian wedding, held by The Church of the Flying Spaghetti Monster, and officiated by Martyn, the ministeroni, has taken place in Akaroa.

“The groom, Toby Ricketts, vowed to always add salt before boiling his pasta, while bride Marianna Fenn donned a colander on her head,” Nick Perry reported for the Associated Press (AP).

During the service, the ministeroni explained some of the core beliefs of Pastafarians. “The Flying Spaghetti Monster created the world. We know that,” she said, according to the AP. “We weren’t around then and we didn’t see it, but no other religion was around to see it either, and our deity is as plausible as any other.”

Fenn, the bride, told the wire service: “I would never have agreed to a conventional marriage, but the idea of this was too good to pass up.”

Last December, New Zealand’s Church of the Flying Spaghetti Monster was recognised by officials as “suitable to officiate weddings,” and Martyn was the first celebrant to receive approval, the New Zealand Herald reported.

“While some claim this is a ‘parody organisation’, members have rebutted this on a number of occasions,” he wrote, according to the Herald. “Most approved organisations are faith-based and cluster around well-known religious views, however, a number have what might be considered an ‘alternative philosophy.’”

The “Flying Spaghetti Monster” was first described in a satirical open letter written by Bobby Henderson in 2005 to protest the Kansas State Board of Education decision to permit teaching intelligent design as an alternative to evolution in public school science classes.